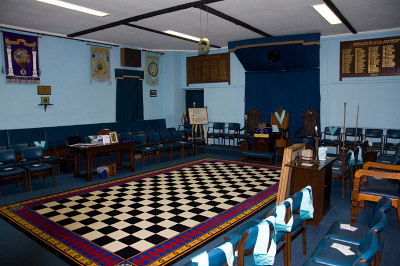 As the name suggests The Be Prepared Lodge is a Lodge who’s members are connected to or have taken the Scout Promise. We meet five times a year at the Wokingham Mason Centre, Once again the quality of ritual and good times outside of the Lodge are very important to the Be Prepared Lodge. If you have enjoyed being in the scouting movement you will love being a member of this lodge!!

To find out more visit The be Prepared Lodge website

Scouting and Freemasonry are independent worldwide Movements, both founded on moral principles and there are many parallels between the two Movements.

The first of these, and the foremost membership requirement of each Movement, is that those who join must profess a belief in a Supreme Being. By not requiring a member’s Supreme Being to be specifically the Christian understanding of God, both Scouting and Freemasonry became attractive to people from around the World. And each also became a place where people of different faiths could meet in fellowship and harmony, with shared moral values, despite the religious, social, cultural and national differences.

The second moral principle shared by the two Movements is service to others. Each Movement expresses this value in its own way. Freemasonry requires every new member, or initiate, to pledge themselves that they are prompted to solicit by a sincere wish to render themselves more extensively serviceable to their fellow creatures. Later in their Masonic progression, on being raised to the third degree, the Freemason takes an obligation that is largely concerned with service to others. Scouting teaches services to others in its Promise and Law, A Scout promises to help other people (‘no matter what Country, Class or Creed the other may belong’).

The third moral principle they have in common is to look after and develop oneself. Again this is expressed in different terms. In Scouting, one learns to always “Do your best” and to “Be Prepared”, and to develop young people in achieving their full physical, intellectual, social and spiritual potential so that they may take a constructive place in society. Freemasonry offers personal development in the form of a spiritual, but not religious journey. The degree structure and ritual of Freemasonry emphasises the Mason’s growth as he progresses from ignorance to enlightenment.

In progressing from the first to the second degree, the Entered Apprentice Freemason learns that Freemasonry is described as “A peculiar system of morality, veiled in allegory and illustrated by symbols.” This beguiling explanation simply means that Freemasonry has a dedicated moral code, and communicates this through stories and symbols. Scouting undoubtedly has its own moral code, expresses in the Scout Law.

Baden-Powell Used stories, or yarns to communicate his messages especially in his “ritual book – Scouting for Boys” and have used symbols, especially in its uniform, badges and emblems.

The Freemason’s first degree obligation requires a Candidate to make a promise, in the presence of the Supreme Being and the members of the Lodge, to keep their honour and to obey a moral code, and Freemasonry’s commitment to charity and Brotherly love parallels the Scout Promise to help other people.

There are two other rather more visible parallels between Scouting and Freemasonry, Both use handshakes different from those in normal everyday use. Scouts greet each other with a left handshake, which was chosen to be distinctive from the right to allow Scouts to identify each other. Freemasonry’s system of handshakes is linked to the degree to which a Mason belongs. The handshake is a means to recognising another Freemason of the same degree and “Serves to distinguish a brother by night as well as by day.

The second of these visible parallels is the system of salutes. Scouts salute with three fingers, representing the three pats of the Scout Promise, which are:-

Freemasons use a complex system of salutes being physical expressions of the Craft. The initiate becomes an Entered Apprentice on taking his first Obligation, a Fellowcraft on being passed to the second degree and a Master Mason on being raised to the third degree. At each point he takes an obligation “restricted to that degree”. Thereafter he may make further progress by becoming Master of his Lodge. Scouting is also built on a system of progression Firstly a six year old joins as a Beaver Scout, followed on as a Cub Scout and then a Scout and at the age of fourteen an Explorer Scout and at all these stages reinforcing their personal development and values and principles of Scouting. The final stage of development, being the Scout Leader of his Troop or Section.

Scouting also recognises adult good service over many years by bestowing one of four awards, namely the Chief Scout’s Commendation for Good Service, the Medal of Merit (for outstanding service), the Silver Acorn for specially distinguished service) and the Silver Wolf (for service of the most exceptional nature).

An interesting parallel is that of diversity. Of the six areas of diversity (Age, Disability, Gender, Sexuality, Race, Religion or Belief), Scouting and Freemasonry have similar approaches. Both Movements have a membership that comprises people from different races, religions and beliefs and both require members to believe in a Supreme Being. Both Movements take active steps to accommodate disabled members. Both have lower age limits, but no upper age limits, for membership.

A coincidental parallel is that, in the UK, both Movements have, in a senior position, H.R.H. The Duke of Kent, KG, who is both the Grand Master of the United Grand Lodge of England and the President of the Scout Association, Indeed, he is the latest in a long line of Royal patrons who have endorsed the work of both Movements since their earliest days.

The final parallel is one that can only really be appreciated by someone who has been a member of both Movements, Scouting has given us our moral basis, the values and code that have been sought throughout our lives. It gives us a sense of belonging and purpose through difficult stages of our childhood and adolescence. From Scouting, we learn responsibility, self reliance and the importance of service to others. Freemasonry has given us a vehicle through which we can develop our understanding of those same values. It has enabled us to develop our sense of purpose and to build and inner strength and resilience. – Scouting and Freemasonry: two parallel Movements.